16 comments
2,473 views
15 min read
16 comments Watch LaterRemove Cinema Mode
One of the most important pieces of gear from 2014.

UPDATE: You can now buy the Nebula 4000 Lite from an American company

This is my final review, see my older blog posts that include many other videos (9 of them) I have created about this gimbal.

I don’t want to spread misinformation, I am in over my head on this review, I really have no idea what I talking about since I am so new to 3-axis brush-less gimbals.

Why this over a Glidecam, simple I suck at the Glidecam. Some might like the Glidecam for it’s organic feel, I don’t care what feel it gives, I just want a steady level shot. I’ve been waiting for something like this for a long time!  I think this small gimbal is up there with the GH4 and a7S as important items of 2014. And just the pairing of these small mirrorless camera and this small gimbal it important in itself!

, Filmpower owns this market until others like Freefly and DJI wake up and see the potential market for this. Big Balance has something but I don’t think it has ever shipped and is only 2-axis. Update: viewer Dennis Packard told me about this The J69 Gimbal which seems to use larger motors and is slightly lighter pistol grip gimbal like the Nebula (I know very little about it). Also another one is from Team Rebel Design Handheld Pro that looks very promising, I don’t know who sells it.

Sorry I can’t test all cameras like BMPCC, I only tried it with the a7S and GH4 with a variety of lenses.

Note: the video of me in my office was filmed on the Sony a7S to the Atomos Shogun in 4K using ProRes LT mode.

Lenses I tried with the Nebula:

I don’t want to shoot wide all the time, I want to have less distortion and zoom in a bit for a different feel but I don’t want to change lenses. The Panasonic 12mm prime is sharp and nice contrast but very limiting in run and gun. The 9-18mm gives me more options, not fast glass so indoor work might not be possible in low light. The 14mm prime is too soft at f2.8.

The Gh4 with 12/35mm lens is only slightly heavier than the a7s with the 20mm and adapter. 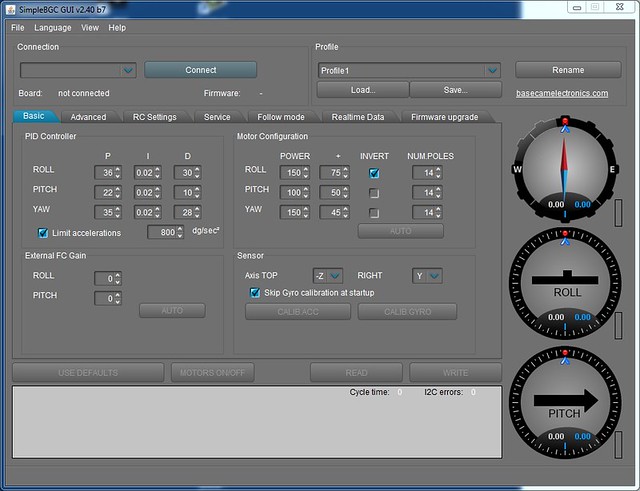 PID Terms (mostly notes to myself for next time):

When Settings are too High (What to look out for)

The follow setup is from a brushless gimbal setup guide by Creyc. His video taught me a lot so I wanted to take notes while watching it, the next gimbal I test I will not have to watch the entire 36 minute video.  After I followed this video I was able to get better results out of the Nebula.

This guide requires the SimpleBGC software that I have demo’ed in my other videos.

Invert mode in two way. First is direct turn from normal turn on, it turn front or back, but can not exceed 180°. Second is fill invert mode need set YAW motor invert mode in app. Camera in normal and grip on top then turn on.

Others Testing this Unit